An ACL injury is one of the worst traumas an athlete can face, due to its historically extensive downtime and labor-intensive physical therapy. Now, with Dr. DiFelice’s Preservation First™ approach to ACL repair, getting back in the game may be closer than you think.

With modern imaging, surgical technology, and rehabilitation, it is possible for patients with ACL injuries to have less invasive surgical options to restore the stability of their knee and return to an active lifestyle. Dr. DiFelice has been using and improving his Preservation First™ method to ACL repair for over a decade, with hundreds of patients having undergone successful surgeries. While there is a natural tendency for people – doctors included – to stick with the tried-and-true technique, it’s clear that ACL repair can be a safe and effective option for many patients.

The standard of care for an ACL injury has always been reconstruction, in which the damaged ligament is replaced with a graft. The body will then make a new ACL out of scar tissue, using the graft as scaffolding. Historically, doctors recommend this surgery for all types of ACL injuries, even though it is the most invasive option with the longest recovery. While ACL reconstruction is an effective solution for many ACL injuries, this approach was based on research and experience of decades prior, and on decades-old technology as well. Times change, and new technologies evolve that can provide doctors with options that had never existed before.

Rather than offer every patient the same procedure, Dr. DiFelice provides a spectrum of surgical options using his Preservation First™ approach, ranging from least to most invasive. If possible, he will repair the ligament if it has only detached from the bone. This is the least invasive option, and preferred by Dr. DiFelice as it results in the best recovery. If the ligaments are only partially repairable, he may recommend an augmentation, which falls in the middle between the least and most invasive surgical options. If the ligaments are not repairable, an ACL reconstruction is needed. This is considered a large surgery and the most invasive.

Using his Preservation First™ method, Dr. DiFelice has successfully used his ACL repair method on 50% of the ACL injuries he has operated on. 25% of these injuries needed repairing and augmentation, and the remaining 25% actually needed the full ACL reconstruction. This means that approximately 75% of patients with ACL injuries that came to Dr. DiFelice were able to avoid ACL reconstruction, a procedure with significantly more downtime than an ACL repair or augmentation. An ACL repair allows patients a faster recovery, fewer complications, and an exceptional return to normal range of motion. 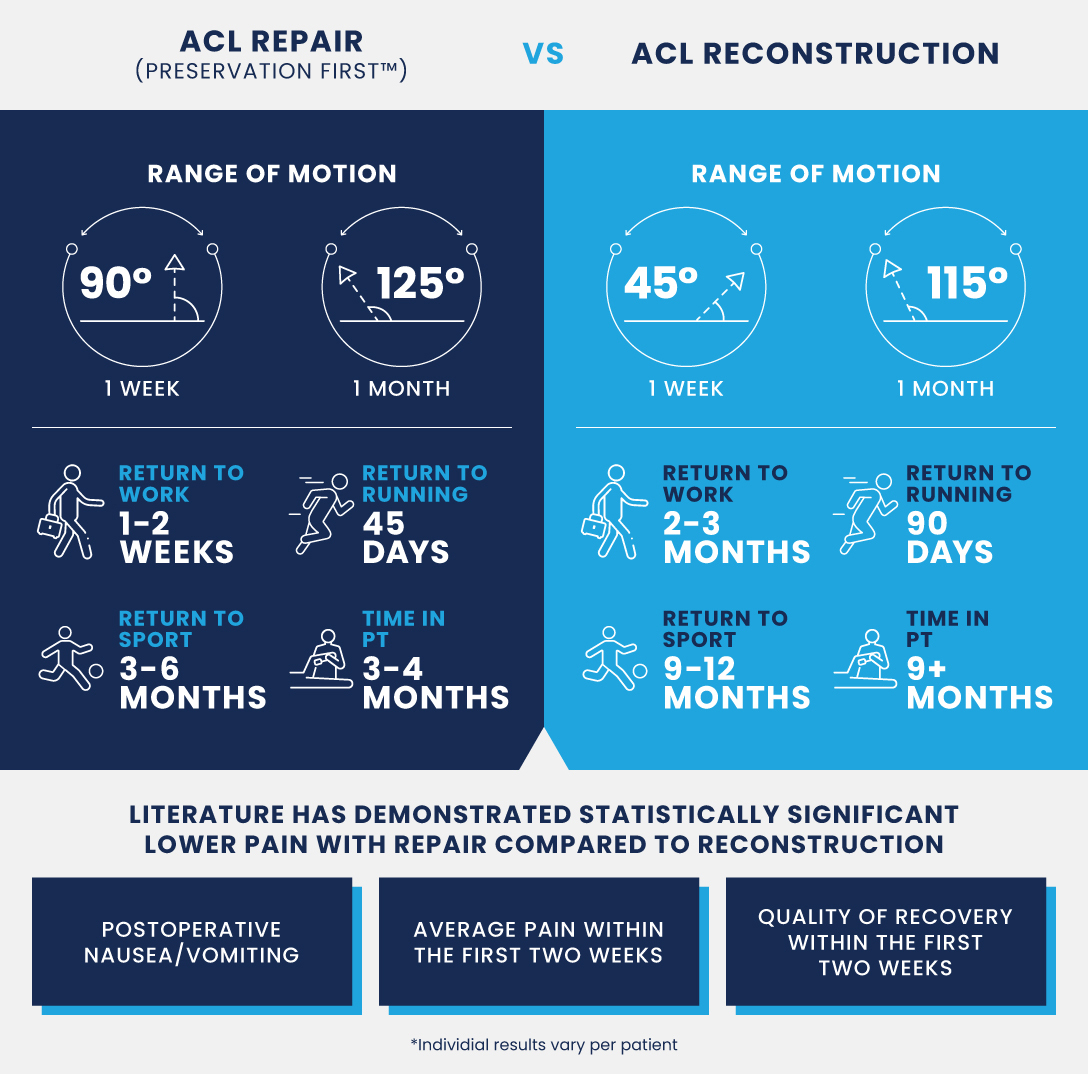 Although a more recently-developed procedure, the risks of complication of an ACL repair are no more than those of a traditional reconstruction. A repair is much less invasive than a reconstruction, meaning there are fewer steps that can go wrong. The only risk that is slightly higher for an ACL repair is the possibility of reinjury. Early reports on ACL repair techniques show that the procedure has a rough “failure” rate of 10-15% vs. a failure rate of 5-8% for ACL reconstruction. However, it is important to note that these reports do not take into account the age and activity levels of the patients studied, nor the type of ACL reconstruction that was performed in regards to technique and graft selection. For example, failure rates are much higher in patients under 21 years of age, and lower for those over 21 years of age. As time goes on, both indications for ACL repair, and the techniques to perform it, have improved and will continue to improve, and “failure” rates will continue to decrease. Dr. DiFelice’s own research has shown that complications such as tearing the ACL of the opposite knee, infections, pain, stiffness, and other symptoms are all less after the ACL repair procedure. Additionally, early recovery of range of motion and regaining of full range of motion is faster using the ACL repair approach.

While our goal is to have zero failures, it’s not possible to say there is no chance of failure with both ACL repair and ACL reconstruction, as our patients go back to being active following their procedure, which is how the ACL was injured in the first place. However, if reinjury occurs and the ACL repair does fail, it can be easily converted to an ACL reconstruction. Dr. DiFelice’s ACL repair is accomplished with a few small incisions, sutures, and anchors; thus, little damage is done to the anatomy during the procedure. If the repair happens to fail, the subsequent ACL reconstruction is more analogous to a primary surgery than a revision surgery, following Dr. DiFelice’s Preservation First™ model of the small, medium, and large surgical options detailed above. An ACL reconstruction failure is a trickier situation due to the complexity of the procedure, and revision reconstruction patients typically do not heal as well as primary reconstruction patients.